I regularly think of things that I need to give you some feedback on, but when I sit down to write an e-mail I am absolutely lost for words!

I am so grateful that I discovered Access Consciousness in a very round about way!!! I was attracted to you because of the colour therapy training that you offer as I have been intrigued with colour for a very long time. And then I saw the Access Vision on your facebook page exactly 1 week after I received my first pair of glasses! I have always had 20/20 vision and became rather stressed when I finally admitted to myself that I actually can not see / can not focus any more. And so I was introduced to Access Consciousness! After several communications with you I decided to do BARS first. And I was just so lucky that there happened to be a Bars course just a week or two before the Vision process! Can I be any luckier?

I just want to thank you for the gentle introduction and your very creative way of teaching! You are an absolute master!

Access Consciousness has become a part of my daily life and it have had so much benefit from it that I can not even begin to tell you about all the small details. There has been many little changes here and there and when put together has been significantly big for me!

Slowly but surely I am now working my way through Gary’s book “Talk to the Animals” – I am really enjoying it and hoping to introduce some of it in the work I do with Bearded Dragons. I am not a vet and I don’t work with Bearded Dragon’s full time, but I have a great passion for them and I run The Bearded Dragon Hotel, where people can book their dragons in to lodge/board while they go on holiday. 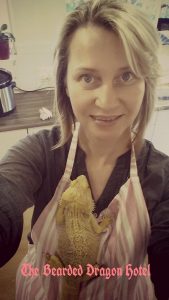 Bearded Dragon’s are lizards from the deserts in Australia. I currently have one as a pet (Spike). Spike has been entrusted to me for 5 years now. I have had others as well, both my own pets and rescue lizards that I nurse back to health and then ensure they get a wonderful home and family to go to.

Many people look at these lizards and think that they are just reptiles with no personality or ‘intelligence’. Fact, they are not the most intelligent lizards, but they have a consciousness greater than most humans and they are indeed extremely sensitive emotionally!

Because of the knowledge that I have gained over the years many people contact me and ask me to tell them about these lizards and how to keep them as pets. Recently a fellow contact me, he had just bought two adult lizards. But they didn’t seem happy and their colours remained dark, their bowl movements were not working as they should, etc. I eventually convinced the man to bring them in and so he did.

While I prepared the space for them to enter into my home last Saturday morning a little voice kept on telling me that I need to use your angel sprays! I used the Angel of Illumination to just clear the space and decided to put it close at hand along with the orange Angel of Rejuvenation. Not really knowing what to expect, I was just guided towards those two.

Upon arrival both the animals were looking rather stressed. The female dragon was the one they were most concerned about so firstly she was handled for a full physical inspection. Although she is a tame pet, she attempted to bite me! To my horror, because I am suppose to be The Dragon Whisperer, but on the other hand, she is a female and it should have been expected!!! I decided to use the Angel of Illumination in an attempt to clear any bad feelings she may be fostering towards humans and to realign and balance her aura!

Penni, I can not even begin to describe what I saw. As soon as she received the spray her colour started changing and I could prod and poke her all I want (obviously gently). She was an absolute breeze to work with. After that we did some hydrotherapy and her poop seemed fairly normal.

The man was holding her afterwards while I assessed the male lizard’s condition, and he could not stop telling me how amazed he is at her current colour and the fact that he can hold her, as she is temperamental and does not want to sit on anyone. Her colour turned the colour of “desert sand” which is when they are at their most happiest!

This is a short little story of Access Consciousness and Colour Therapy combined, because I kept on asking myself that morning, what is required of me to help this animal? What is there that I can do to make a difference now and in the future? What can I introduce that will bring along change in the human and the lizard?

I do think the gentleman thought I was a little bit of a coo-coo head, but he was indeed very grateful for the outcome of the assessment and for the time I spent with his lizards.

A small act of kindness made a great difference that morning I believe! And my soul was dancing afterwards.

Next I would like to start talking to Spike about the angel sprays. I want to ask him if he can choose the one that he requires the most! It is a little experiment that I will have one of these days. I am not sure if I should give him all the sprays to choose from or just 3 or 4.

I will let you know how that goes!

Wishing you a wonderful weekend!